Selected as a NASA astronaut in 1996, Wilson has logged over 42 days in space across three missions (STS-121, STS-120, STS-131). Learn more about Wilson with these three fast facts:

1. Wilson was the second African American woman to fly in space.

2. She has flown to the International Space Station (ISS) three times. 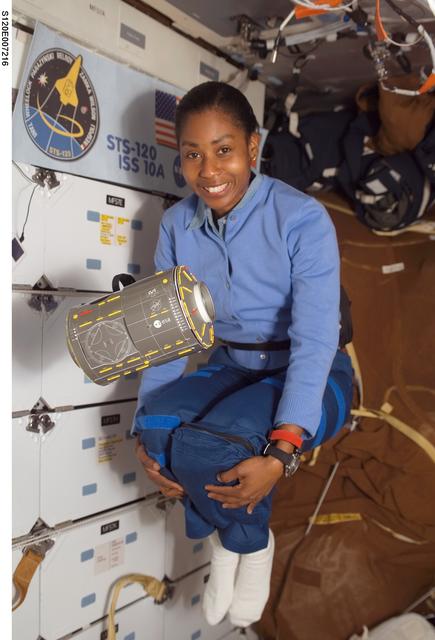 Wilson is no stranger to flying in space, nor is she unfamiliar with the ISS, having flown to the station for each of her three spaceflights.

During her first spaceflight, STS-121, Wilson served as a mission specialist for a 13-day Return to Flight test mission and assembly flight to the ISS. She operated the robotic arm to install the “Leonardo” Multi-Purpose Logistics Module and oversaw the transfer of over 15,000 pounds of equipment and supplies to the ISS.

Her second spaceflight, STS-120, delivered the “Harmony” module to the ISS, as well as an Expedition 16 crew member. Wilson served as the Flight Engineer, tasked with operating the robotic arm for vehicle inspection and spacewalk support.

Wilson’s third flight, STS-131, was a resupply mission to the ISS. The Discovery crew transferred over 27,000 pounds of supplies, equipment, and scientific investigations to the station. Again, Wilson served as spacewalk support by operating the robotic arm.

One of Wilson’s interests is stamp collecting. She began collecting stamps when she was just a child.

“I mostly collect stamps off letters that I receive. I usually don’t go out and purchase stamps but I like to be able to tell a story about a stamp: it came from this individual, on this card,” Wilson told collectSPACE in an interview before her first spaceflight.

While Wilson would have loved to fly one of her stamps in space, she explained it was not permitted due to federal regulations which prohibit certain items from being included in an astronaut’s personal preference kit (PPK).