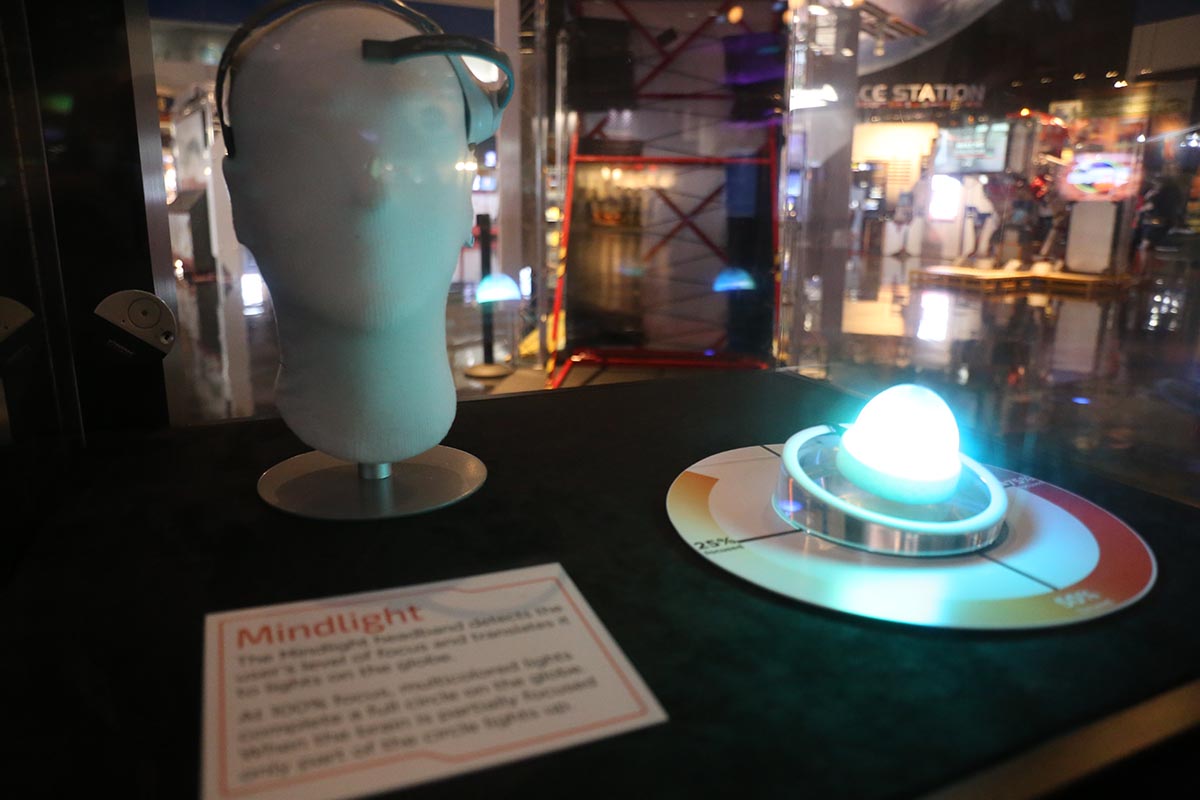 We added some new and exciting supplementary exhibits to our spring exhibit Bionic Me. Since the center is temporarily closed, we are bringing them to you virtually!

Our exhibits team curated some amazing inventions that demonstrate how robotic technology and innovations in wearable electronics could help NASA astronauts.

On Earth, verbal communication uses sound. Astronauts may not be able to rely on sound for communication in space. Spacecraft like the International Space Station are very noisy due to the many machines used for life support and experiments. Speaking through spacesuit radios or in the artificial atmosphere of a spacecraft changes voice quality.

Researchers want to find out of clothing that communications the wearer’s emotions can help improve verbal and nonverbal communication in space.

Clothing is already used to communicate style, cultures, and roles nonverbally. (Re)Connect is emotionally smart clothing that communicates emotions. It is the first to identify and track emotions and translate them into clothing that changes color and shape.

(Re)Connect garments are 3D printed fabrics outfitted with soft robotics. Cutting-edge voice software is used for input. Sound goes into the microphone to the microcontroller and software Empath which analysis and detects emotion. The results are then displayed via haptic and visual feedback through inflatables, vibrations, color and animated lights.

Mindlight is a smart light globe that reads the electrical activity in the brain. It turns brain frequencies into light patterns.

Users can use the light feedback to train their brain to focus faster, for longer periods, and more deeply. It could also help users perform certain tasks when they know they are able to achieve a higher level of focus.

Designers are working to increase the information Mindlight can read. For example, the device could alert for pollution or chemicals. Medically, the light patterns could indicate pain, allowing for non-verbal communication.

In space, like on Earth, Mindlight may help crewmembers avoid interrupting someone who is concentrating deeply and being productive.

On Earth, Mindlight may help people who have difficulty speaking or carrying on a conversation to communicate in previously unknown ways.

Because there is no air in space, spacesuits are pressurized with oxygen during spacewalks, technically called extra-vehicular activities (EVAs). This pressure leads to a stiff suit, making motions difficult. It is similar to what it may be like to move while wearing a balloon. Astronaut’s muscles get very tired during spacewalks.

NASA engineers are developing wearable robotics devices to help astronauts work more easily in space. This robotic technology can also help people on Earth who have trouble moving due to a limb difference or injury.

These wearable robotic devices were developed to assist astronauts, as well as manufacturing workers on the ground, with repetitive heavy labor. The robotics alleviate stress on the human body, which is why they are also being used to help injured patients on Earth in their recovery.

In the video above, take a sneak peek at RoboGlove, which was developed across the street at NASA Johnson Space Center.

These innovative technologies have been invented to physically help humans accomplish difficult or repetitive tasks and improve communication. Success in both areas will be crucial as humans venture farther from Earth during longer duration spaceflight missions. Simultaneously, these technological advances will also improve quality of life for humans on the ground.