Voyager has left the solar system; we have rovers on Mars and New Horizons has ventured into the Kuiper Belt. But the goal is not only to have robots in space, but a sustainable human presence. This human element is the most fragile part of the mission.

The challenges to humans leaving the confines of Earth are numerous, and NASA has identified five major categories on which to focus. These include:

In the upcoming series we will present each of these risks and investigate the work NASA is doing to keep our astronauts safe on the ISS and our venture beyond Low Earth Orbit.

Gravity (or lack of) affects our every move

Gravity – unless we are immersed in calculations in physics class, most of us rarely think about it here on Earth. Yet, be it here on Earth or in space, gravity affects our every move. All organisms, as we know them, and their mechanisms to survive have evolved in a 1-G environment.  Leaving this environment presents numerous challenges to these systems.

On launch, an astronaut can go from 1-G to several as the rocket accelerates and reaches escape velocity. In as little as eight minutes, the vehicle can attain the desired orbit and experience weightlessness.  The International Space Station is approximately 250 miles up, and although there is still gravity at this height, (approximately 9.68m/s2 compared to 9.8m/s2 on Earth’s surface), the station is in freefall and experiences an apparent weightlessness.

One of the first changes to the body is the movement of fluids. On Earth our muscles work to pump fluids up through the body against gravity, and gravity helps return the fluids. Although the astronauts enter a weightless environment, their muscles are still working as if they were on earth. This results in fluids being pumped up and concentrating in the upper body. The shift of fluids results in a puffy head often seen in astronauts. It may also result in increased pressure on the back of the eye which can change its shape, and may change vision.

How lack of gravity affects astronauts in space 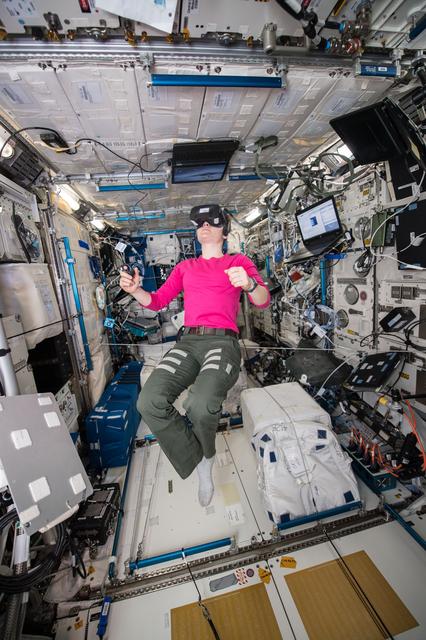 With no loading of gravity, there is a loss in muscle mass and bone density. To counteract these changes astronauts exercise two hours a day. The exercise devices on station include a treadmill and an ARES for resistance exercise. These machines however take up quite a bit of space, so NASA is working on a miniaturized version for Orion, where space is at a premium.

As the body adapts to its new weightless environment some of the conditions improve, although some may remain or get worse the more time the astronaut spends in space. A mission to Mars is estimated to be at least two and a half years. During this time they will go from 1-G on Earth to weightlessness in open space, 1/6th gravity on the surface of the Moon (if landing) and 1/3 gravity on Mars!

Fortunately, NASA’s Human Research Program is continually studying the effects of gravitational field changes and developing countermeasures to ensure the safety of the most fragile component of these missions, the humans.