On June 3, 1965, NASA astronaut Ed White stepped out of his Gemini capsule and into space for the first American spacewalk.

Attached by only a 23 foot tether and 25 foot umbilical, White floated in space for roughly 20 minutes. Circling the Earth at a speed of 17,000 miles per hour, he traveled 6,500 miles.

The first American spacewalk was a part of the four-day Gemini IV mission to study the effects of prolonged spaceflight. Ed White served as the mission pilot and James McDivitt as the mission commander. The crew of two spent the remainder of their flight conducting 11 experiments, which included Earth photography and spacecraft navigation.

Relive the excitement by watching the NASA archive footage of the spacewalk below.

In honor of this feat, we have gathered five fast facts about White and his historic flight for you to learn more about the first American spacewalk.

1. Originally, the plan did not include White completely leaving the spacecraft.

The original plan was for White to “stand up in the seat and stick his body out of the spacecraft.” However, this all changed as soon as Soviet cosmonaut Alexei Leonov safely completed the first spacewalk. Click here to learn more from Smithsonian National Air and Space Museum Senior Curator Michael Neufeld.

2. The mission marked the first time the U.S. flag had been worn on a spacesuit.

It may be hard to imagine a time when the U.S. Flag hasn’t been worn on a spacesuit. It’s all thanks to the Gemini IV mission, which started the tradition of donning the American flag on spacesuits. Fun fact: White and McDivitt purchased the flags they wore themselves.

3. White used an oxygen-jet gun to maneuver during the spacewalk. 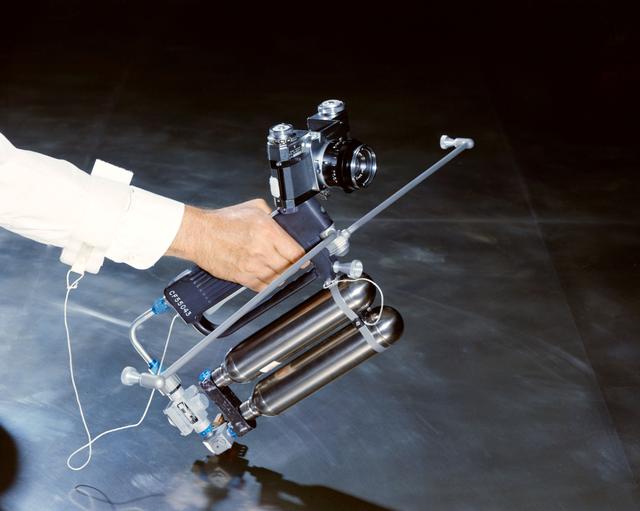 White used a tool called the Hand-Held Maneuvering Unit to propel himself during the spacewalk. The unit is constructed of aluminium and stainless steel, with three small rocket nozzles, two of which are located on extenders, permitting the astronaut to move his body to the right or left, or gently forward.

There is a rocker switch incorporated into the handle for the operation of the nozzles, and two oxygen tanks under 3400 psi of pressure for fuel. The unit was manufactured by Airesearch Manufacturing Company and transferred to the National Air and Space Museum in 1967.

During White’s spacewalk, while the capsule door was open, his right comfort glove floated out of the capsule and into space. If you watch closely in the video clip above you’ll see it around the 5:43 time mark.

5. White had so much fun during his spacewalk that he didn’t want it to end.

Time flies when you’re having fun! It certainly did for White, who didn’t hold back on expressing his displeasure with the thought of ending his spacewalk. “I’m not coming in…This is fun,” White said. It was enough to land him on the front page of the New York Daily News the very next day, labeled as ‘reluctant to return’ to the spacecraft. Upon ending his stroll in space, White said, “I’m coming back in, and it’s the saddest moment of my life.”