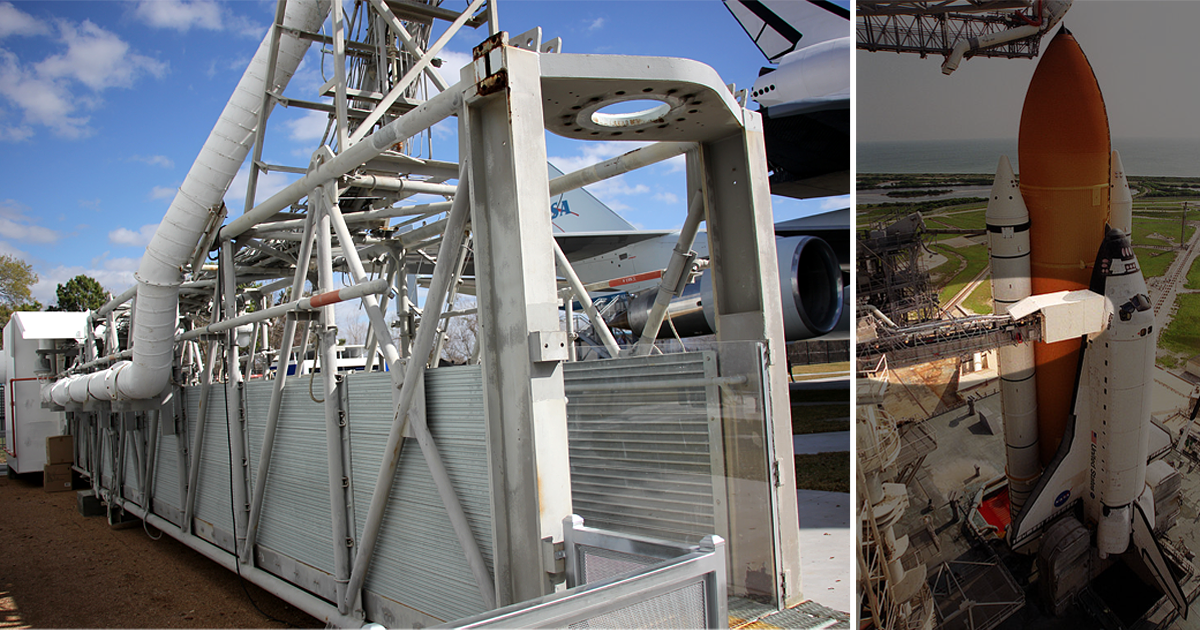 Have you seen the shuttle-era Orbiter Access Arm in Independence Plaza? Find out how this historic artifact found its way to Space City all the way from the Space Coast in today’s blog post.

The Orbiter Access Arm (OAA), also called the gantry, spanned the gap between the launch tower and the shuttle orbiter’s entry hatch more than 147 feet above the ground. Astronauts took their final steps on Earth across this walkway and made final preparations for launch in the integrated clean chamber called the “white room.”

The arm remained in the extended position until seven minutes, 24 seconds before launch to serve as an emergency escape route for the flight crew. It is 65 feet long, 5 feet wide, and 8 feet high, and it could be mechanically or manually repositioned in about 15 seconds in the event of a contingency. 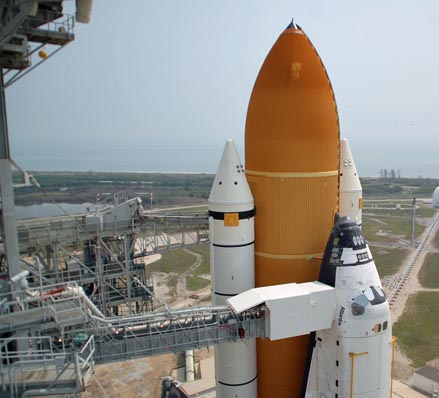 When and where was our OAA used?

Our OAA was located at Launch Complex 39B (LC-39B) at NASA’s Kennedy Space Center (KSC) in Florida. Originally part of the Apollo launch tower, it was modified for the Space Shuttle Program and used for 53 shuttle missions between 1986 and 2006. The first time it was used was STS-51-L, Challenger’s last flight. The last steps taken on Earth by the STS-51-L crew were across this gantry. 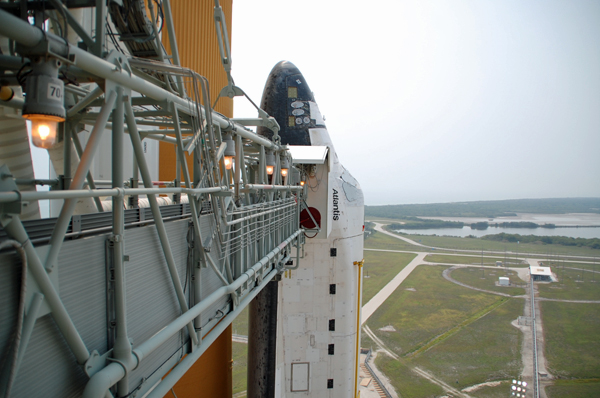 When was it retired?

When the Shuttle Program ended, KSC dismantled Launch Complex 39B, one of the two shuttle launch pads, to prepare for future modifications for the Space Launch System (SLS) and Commercial Crew Program.

A member of the KSC exhibits team requested two pieces of the launch structure be saved – the OAA and the “beanie cap,” which was the oxygen vent hood positioned above the external fuel tank.

Both artifacts were set aside to use in the new shuttle building at Kennedy Space Center Visitor Complex.

How did it end up in Space City?

Space Center Houston Exhibits Director Paul Spana traveled to KSC with a transportation team to plan the move of the shuttle replica Explorer, now named Independence and on display at Space Center Houston atop the historic shuttle carrier aircraft NASA 905.

Coincidently, while Spana was as KSC, the KSC exhibits team learned they only had room to display one of the two artifacts they had saved. They chose to keep the beanie cap and offered Spana the OAA, which was tied down in a field and would go to the scrap yard if it couldn’t be transported to Space Center Houston.

Spana worked with the transportation team to see if it was possible to take the OAA back to Space City. After measuring the massive artifact and exploring options, the team developed a plan to drive the OAA from Florida to Texas via a flatbed trailer. 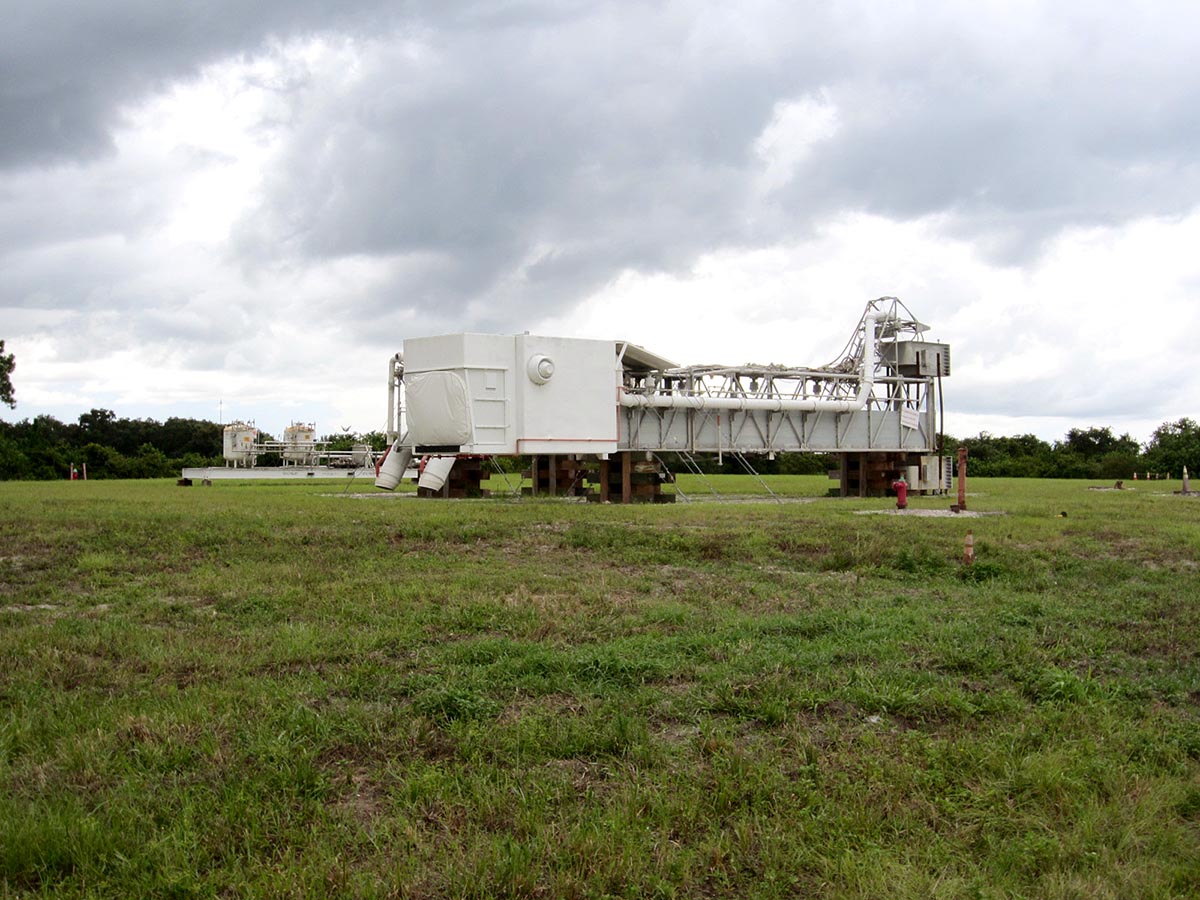 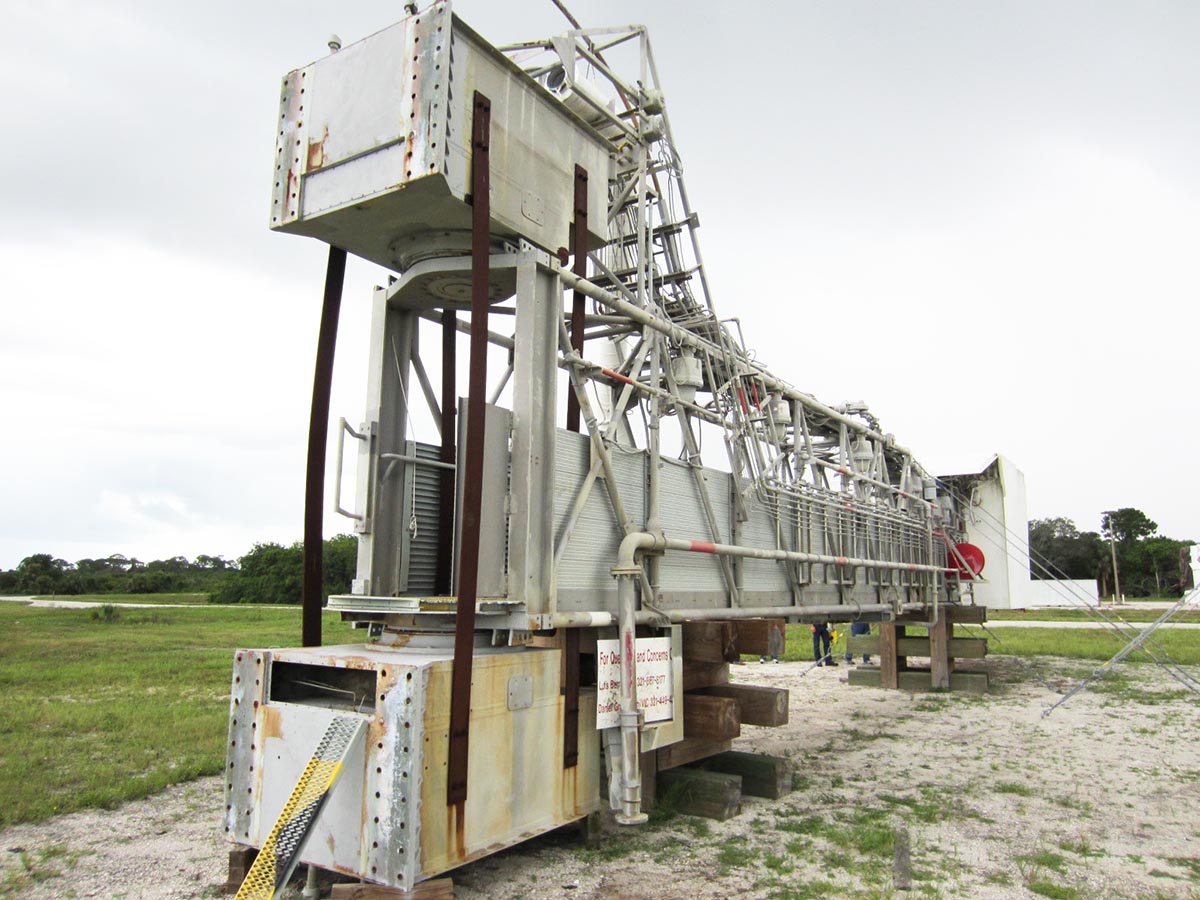 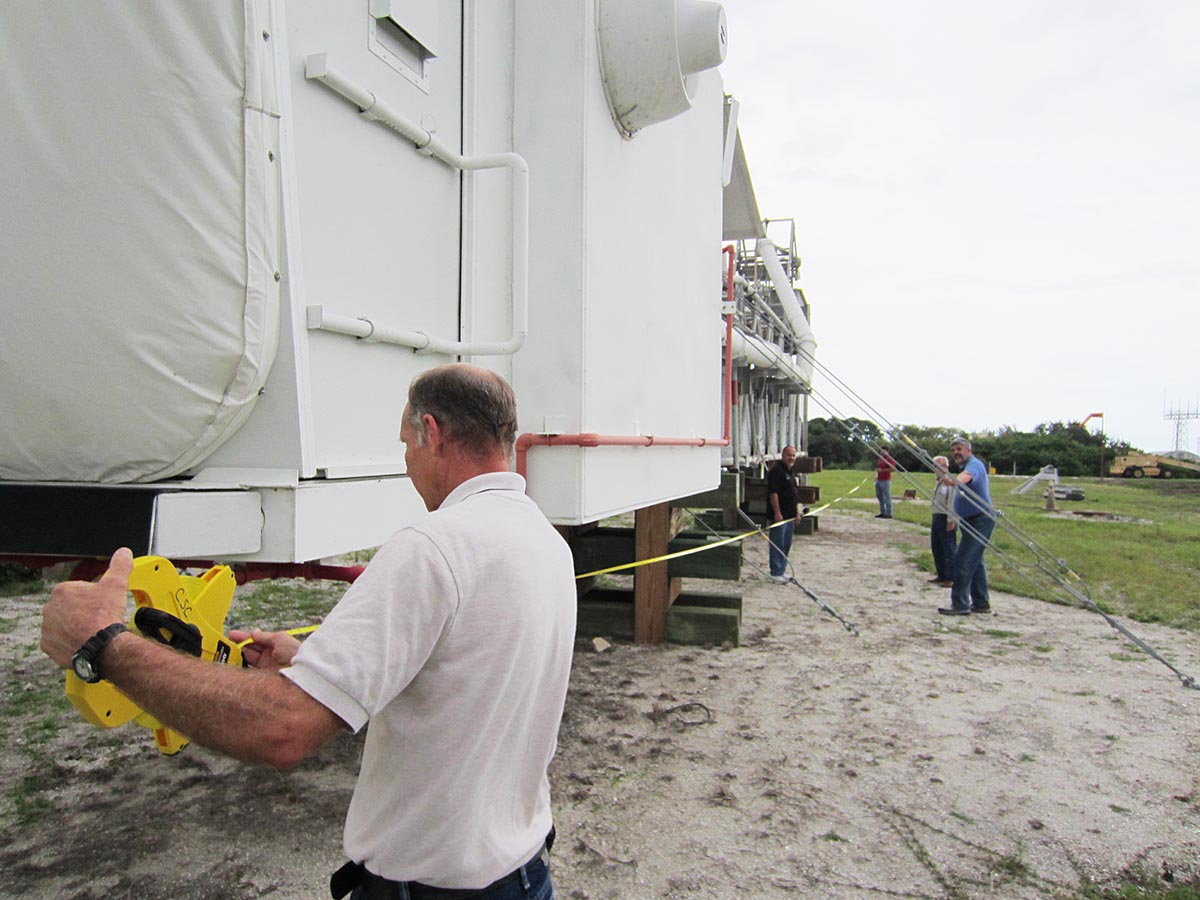 Where is it on display?

Spana originally planned to display the OAA next to the shuttle replica Independence. Since the Independence display wasn’t yet complete, the OAA was temporarily stored at Rocket Park.

However, before the OAA could be placed on display at the center, we acquired the historic shuttle carrier aircraft NASA 905. This changed Spana’s plans.

There were only a few locations the 65-foot-long OAA could be placed, and in 2016, it found it’s home in Independence Plaza across from NASA 905.

The OAA was designed to be exposed to the elements so it didn’t require much protection to be displayed outdoors.

The preservation efforts included enclosing the white room with Plexiglas to protect it from rain. The lighting across the whole gantry was rewired in order to use the existing fixtures. Additionally, a rubber mat was added along the path of the OAA for guest safety.

The next time you visit Space Center Houston, walk down this historic artifact and experience what it was like to be an astronaut taking your last steps on Earth before launching to the stars. 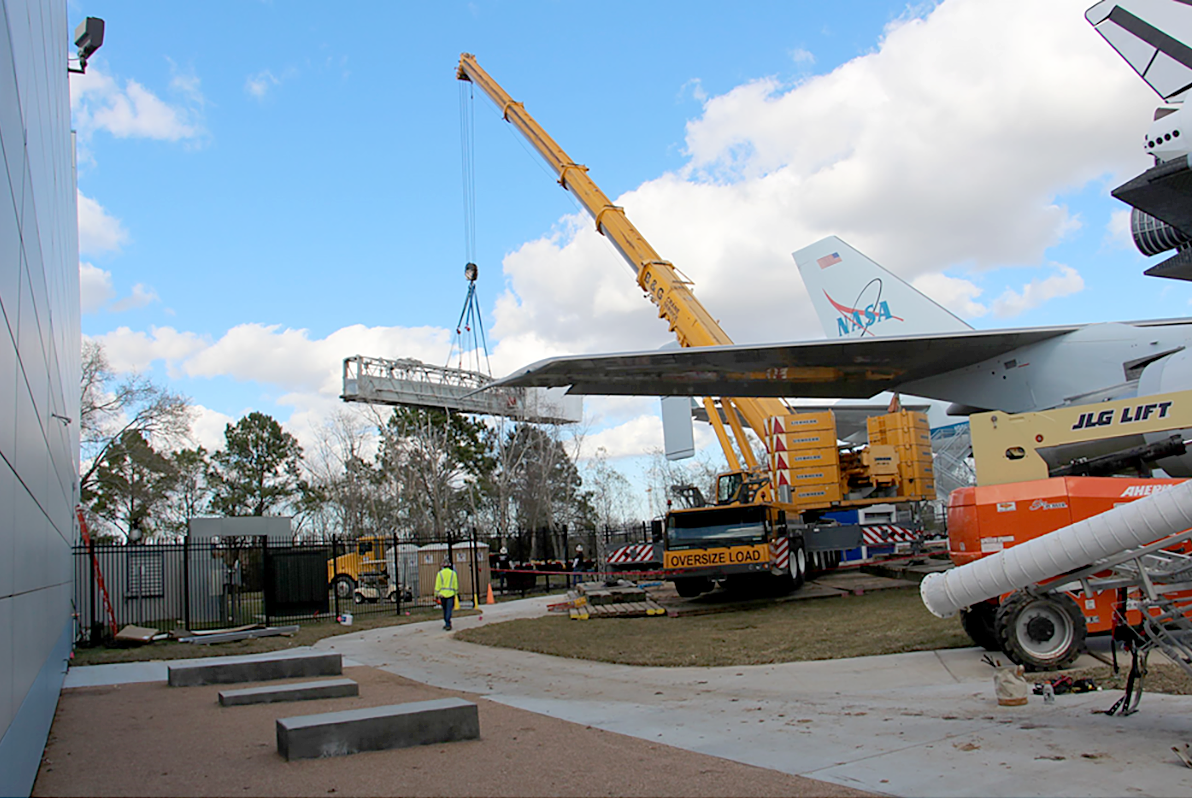 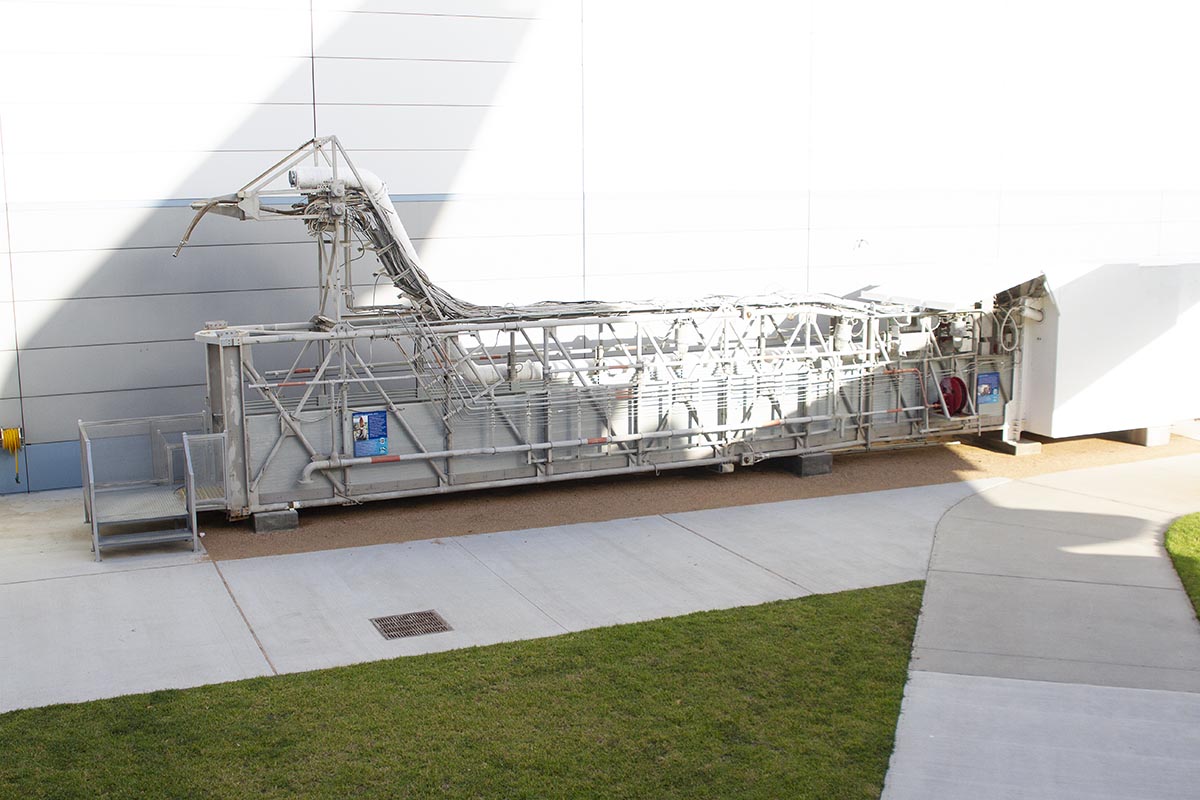 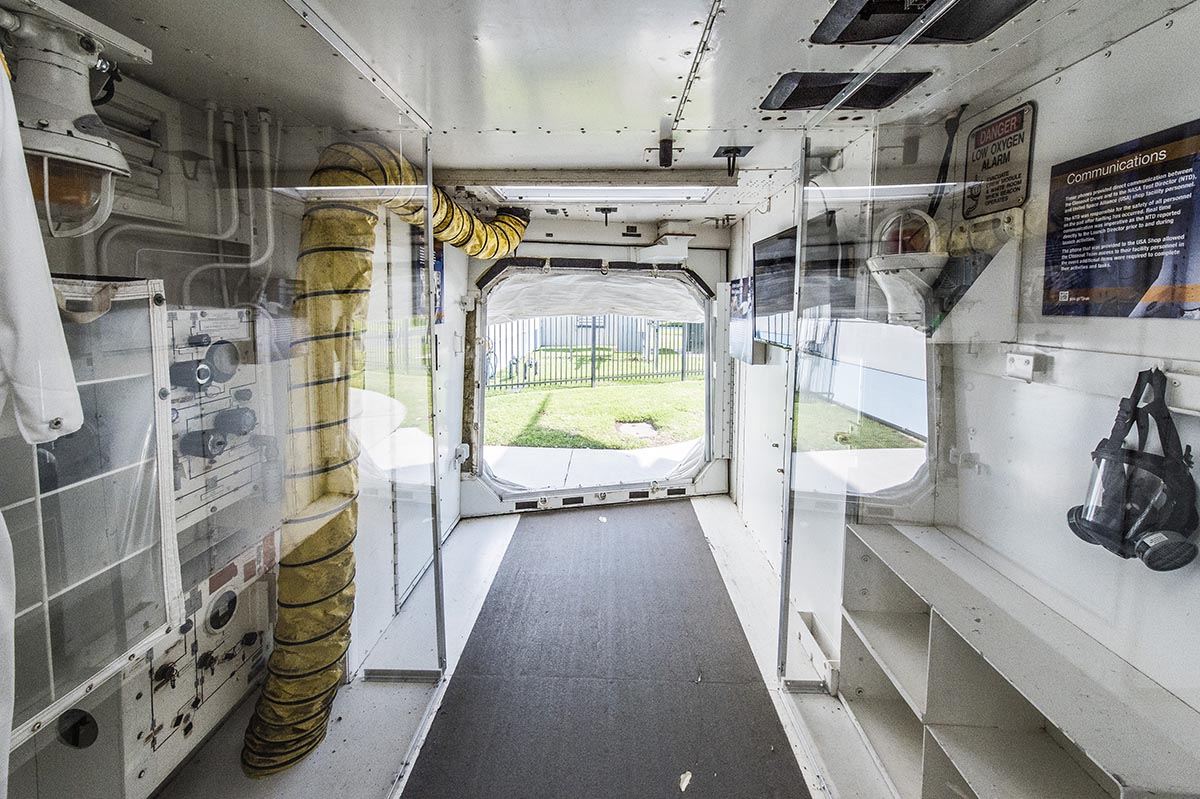 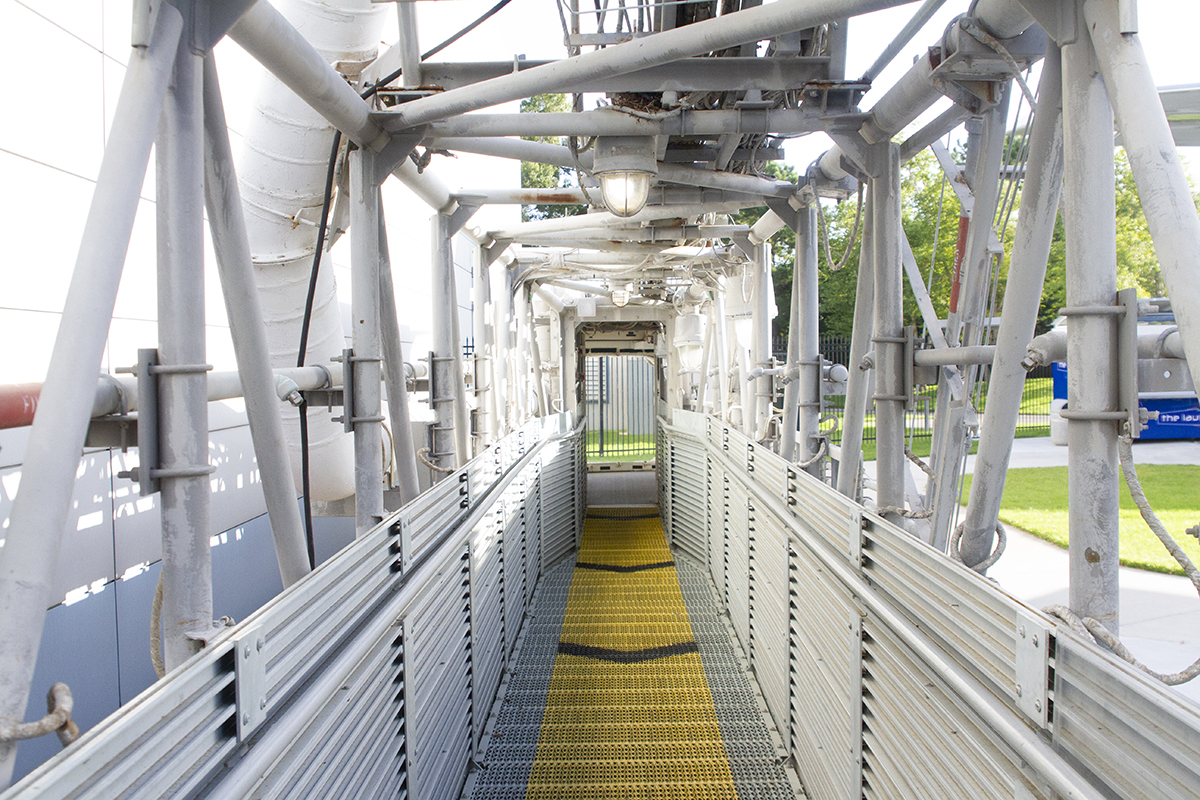