58 years ago this week, NASA launched Telstar, the world’s first active communications satellite, into low-Earth orbit. The feat captured imaginations around the globe and sparked a new age of instant worldwide communications.

However, 58 years ago, a beach-ball sized satellite sparked a new era of electronic communications. That satellite was Telstar 1.

It launched on July 10, 1962. The mission was a cooperative effort between AT&T and the space agency to demonstrate, “the feasibility of transmitting information via satellite.”

The mission was a brilliant success. It came to an end in Nov. 1962, although NASA documented that the satellite was “successfully reactivated,” still sending data until mid-February, when the transmitter finally failed.

The mission was followed up by Telstar 2, which launched nearly a year after the launch of Telstar 1.

In recognition of this monumental mission, we are celebrating the anniversary of the launch of Telstar with five fast facts about this game-changing satellite!

1. The initial plan did not include France and Britain.

Shortly after launch, Telstar 1 broadcast the world’s first transatlantic television signal. Originally, the plan was for transmissions to be kept between Washington D.C. and Andover, Maine. However, a French town, Pleumeur-Bodou, picked up the transmission too, witnessing a patriotic display of American imagery and music!

On July 12 (July 11 in the U.S.), the station in Pleumeur-Bodou sent their own test, a recording of Yves Montand, a famous French singer, along with images of Paris. Britain then joined in on the fun as well, contributing a live broadcast with the engineers of Goonhilly. Americans at home watched these short broadcasts. The transmissions only lasted several minutes! 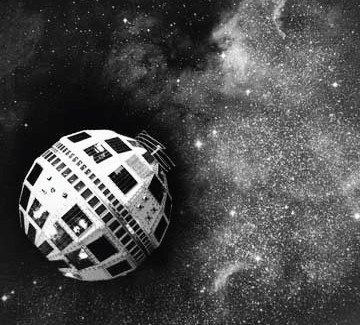 Telstar was the first commercial payload in space. The satellite, developed by Bell Telephone Laboratories for AT&T, was part of an effort by NASA to, “demonstrate the United States’ willingness to share its civilian space efforts with the public,” according to the Smithsonian National Air and Space Museum. Telstar is part of the National Air and Space Museum collection.

NASA’s Commercial Crew Program echoes this same sentiment today, fostering partnerships with privately owned companies to further technology and space exploration for the good of all humankind. From satellite television to a return to the Moon, NASA’s commercial partnerships will continue to innovate, test, and tackle tomorrow’s space-age challenges!

3. Telstar 1 came in peace for all humankind.

4. It was the first technology to support transatlantic television transmissions.

Throughout its operational life, Telstar 1, “facilitated over 400 telephone, telegraph, facsimile and television transmissions.”

How could it not? It was a trailblazing mission that captivated the imaginations of people all over the globe. The launch inspired the one-hit-wonder “Telstar,” and even piqued the interest of Pope John XXIII! Telstar even provided television coverage of major events, like the death of Marilyn Monroe.
[envira-gallery id=”38501″]

It is also hard to look past the design similarities between between Telstar and the infamous Death Star from the popular “Star Wars” saga. The Death Star bears a striking resemblance to the world’s first active communications satellite, even if the objectives couldn’t have been more different.