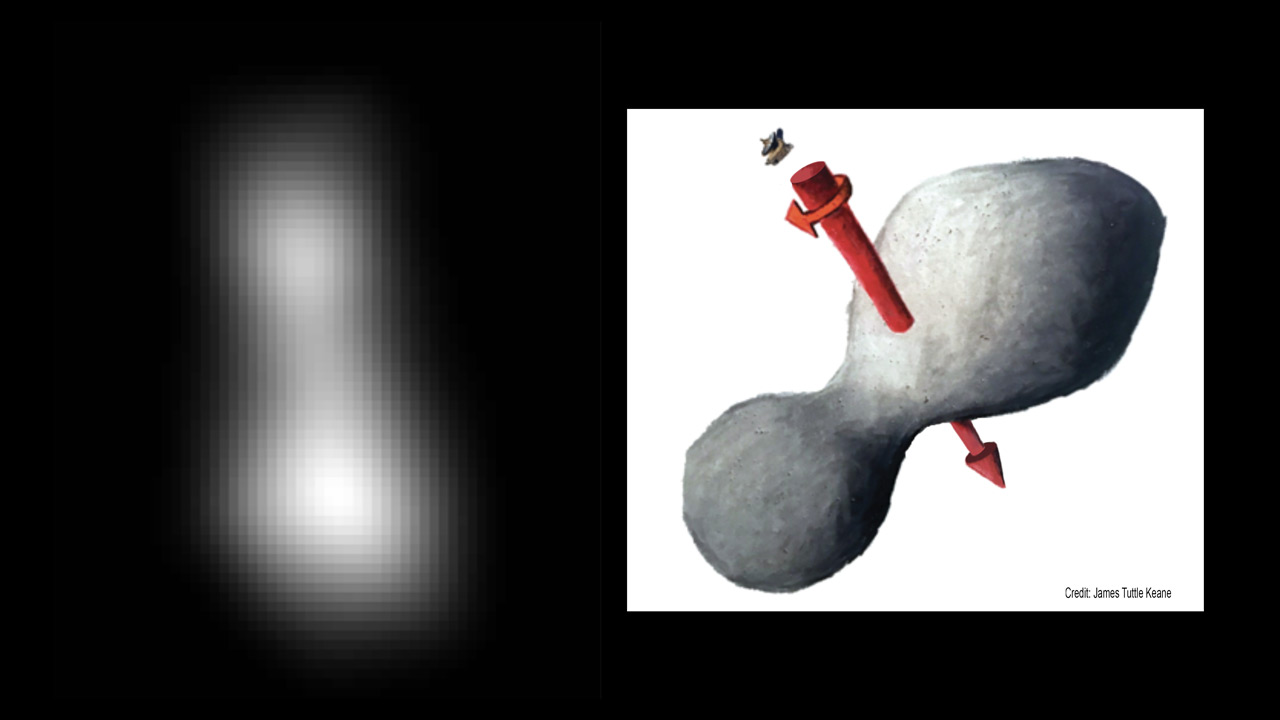 The cool thing about spacecraft is that they continue on for as long as possible after their primary mission is completed. For instance, Voyager 2 crossed into interstellar space last year and the Mars rover Opportunity has been functional for 14 years.

New Horizons provided some of the best images of Pluto we’ve ever seen in 2015, but it’s mission didn’t stop there. The plucky spacecraft kept journeying into the Kuiper Belt and gave scientists an unprecedented view of a new mysterious object. 2014 MU69 is a celestial body in the Kuiper Belt that showed up as a very tiny pixel for most of our observational history. New Horizons close flyby will give scientists the closest-ever view of an object from the Kuiper Belt.

So that’s a lot to unpack. Let’s see if we can do this incredible continuing mission justice.

The Kuiper Belt is a region of space, a doughnut-shaped ring of icy objects around the Sun, extending just beyond the orbit of Neptune from about 30 to 55 AU. The known icy worlds and comets in both regions are much smaller than Earth’s Moon. Comets that take less than 200 years to orbit the Sun probably originate in the Belt.

Things get really weird that far out, too. Some of these tiny little planetoids have their own even tinier moons. One of them, Haumea, is shaped like an egg and has a ring like Saturn. It’s also really, really big. There could be up to hundreds of thousands of those little planetoids in its expanse. Oh, and also trillions of comets. Our solar system is a lot more interesting on its edges than we learned about in middle school, huh?

NASA has a great quick explainer with a few more facts on the Kuiper Belt here.

TALLY HO ULTIMA THULE!! An ancient relic of solar system formation, 4+ billion miles away, as dark as dirt, & shining only in the faint sunlight of the Kuiper Belt. Here it is, in a New Horizons imaging sequence. SEE IT MOVE, AGAINST THE STARS? TALLY HO! We’ll be there on Monday! pic.twitter.com/EExUpK6wLt

Early in the morning on Jan. 1, New Horizons flew past this cool object, giving NASA and the world its first up-close look at the weird and wild things in the Kuiper Belt. Nicknamed Ultima Thule, 2014 MU69 is 4 billion miles away from the Sun, is shaped like a bowling pin, spins like a propeller and is only about 20 by 10 miles in size.

One of the mysteries that New Horizons already solved was Ultima Thule’s brightness. See, earlier images of the object didn’t show any variation in its brightness. This could have been caused by many things, but spinning like a propeller means the same side is always facing the Sun, thus showing less variation in brightness.

What did New Horizons do?

New Horizons got within 2,200 miles of the object, collecting data and taking high resolution photos. That data is already being beamed back to NASA, a process that will go on for 20 months.

“New Horizons performed as planned today, conducting the farthest exploration of any world in history — 4 billion miles from the Sun,” said Principal Investigator Alan Stern, of the Southwest Research Institute in Boulder, Colorado. “The data we have look fantastic and we’re already learning about Ultima from up close. From here out the data will just get better and better!”

Almost 13 years after the launch, the spacecraft will continue its exploration of the Kuiper Belt until at least 2021. Team members plan to propose more Kuiper Belt exploration.

“Congratulations to NASA’s New Horizons team, Johns Hopkins Applied Physics Laboratory and the Southwest Research Institute for making history yet again. In addition to being the first to explore Pluto, today New Horizons flew by the most distant object ever visited by a spacecraft and became the first to directly explore an object that holds remnants from the birth of our solar system,” said NASA Administrator Jim Bridenstine. “This is what leadership in space exploration is all about.”